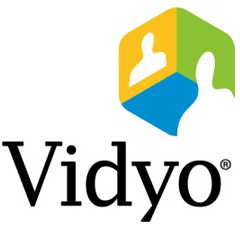 Hackensack, NJ, October 2, 2013 — Vidyo, Inc. has been cited as having the “the best overall video quality and performance” by Forrester Research, Inc. The company also received top ranking for its technology partners among all vendors in addition to being ranked as a “Strong Performer,” overall. Forrester invited 10 vendors to participate in its September 2013 report, The Forrester Wave™: Desktop Videoconferencing, Q3 2013. A complimentary copy of the report is available here.

According to the report, “Vidyo’s routing architecture shifts the heavy media-processing power from bridges to the endpoints, significantly reducing the cost per port to deploy video conferencing.” Additionally, “In our demo, Vidyo clearly delivered the best overall video quality, even with a large number of participants. Vidyo is foremost a provider of desktop video conferencing but also sells room systems based on the same software and routing architecture. Its ability to deliver solutions from the desktop to the conference room put it more squarely in competition with room-based vendors…” The report also states, “In contrast to our 2012 evaluation of Vidyo, during the 2013 Forrester Wave, it provided impressive enterprise customer references, each using its technology on a large scale.”

“It’s an honor for us to be recognized as a strong performer in Forrester’s report for desktop video conferencing,” said Ofer Shapiro, CEO and co-founder, Vidyo. “We strive to advance the industry and develop the best video solutions for our customers and partners. Our collaboration with Google to bring Vidyo’s SVC technology to WebRTC and our work in standardizing H.265 SVC provide proof points that Vidyo’s architecture is both standards agnostic and future proof as we continue to lead innovation in this field.”

“We agree that desktop video is truly changing the landscape of videoconferencing”, adds Trinity Video Communications CTO, John Jennings.  “While we still sell a number of room systems from both traditional VTC vendors and Vidyo, the overwhelming factor in the decision-making is the experience on desktop and mobile devices”.  Trinity sells products from Cisco, Lifesize, Polycom and Vidyo, and provides consulting for UC deployments including Microsoft Lync.

Vidyo believes the report supports key trends that are core to its value proposition:

The VidyoWorks™ communication and collaboration platform is software-based, highly flexible and can be easily customized for individual enterprise and vertical market video conferencing needs. The VidyoRouter™ is based on the company’s patented Adaptive Video Layering architecture and leverages the standard based Scalable Video Coding (SVC) technology. It eliminates the MCU and offers unprecedented error resiliency, low latency and rate matching enabling natural, affordable, high quality video to work over the Internet, LTE, 3G and 4G networks. Vidyo has been active driving H.264 SVC, HEVC and SIP video conferencing interoperability in various standards bodies since 2005 and most recently announced it will collaborate with Google to enhance video quality within WebRTC by developing a scalable video extension for the VP9 codec as part of the WebRTC client open source project.

Trinity Video Communications provides video, audio and other communications options for commercial, healthcare, education and government applications. Trinity is based in Louisville, Kentucky, and also has offices in Cincinnati, Ohio and Sterling, Virginia. Trinity has a number of government contracts and holds a GSA Schedule 70, with 75% of its employees holding Top Secret clearance. Trinity Video Communications specializes in secure, mobile applications, linking any device, any time, anywhere.

If you would like more information about Vidyo and how it can transform communication within your organization, contact a Trinity Video Communications representative today at 1-800-261-9008.

Many of the products and features described herein remain in varying stages of development and will be offered on a when-and-if available basis. The product plans, specifications, and descriptions are provided for information only and are subject to change without notice, and are provided without warranty of any kind, express or implied. Vidyo reserves the right to modify future product plans at any time.