A forum to discuss the REDEEM (Record Expungement Designed to Enhance Employment) ACT, which is criminal justice reform legislation structured to give Americans convicted of non-violent crimes a way to seal their criminal records, was recently held at Sullivan University’s College of Pharmacy and featured Senators Rand Paul (R-KY) and Cory Booker (D-NJ), whom joined the discussion via videoconference. Video of their remarks can be found here: http://www.youtube.com/watch?v=X5JqfLg22BM. 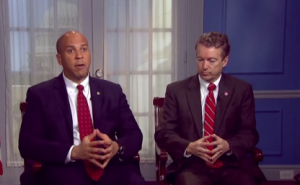 Louisville-based Trinity Video Communications partnered with event organizers to ensure the proper systems, software and support was in-place to create a secure and reliable video connection. “Our team was honored to be a part of such an important event, especially one where a seamless, secure and reliable video connection was needed, which is our specialty,” says Barry Sawayer, CEO at Trinity Video Communications. “We’re extremely pleased both Senators were able to provide their perspective on this topic without interruption, which was our ultimate goal,” said Sawayer.

About The REDEEM Act

The REDEEM Act was first introduced last year. Sens. Paul and Booker intend to re-introduce the legislation in 2015 and bring it to a vote in the Senate. The original press release outlining the REDEEM Act can be found here: http://www.paul.senate.gov/?p=press_release&id=1192.