Court systems continue to transition from their existing, outdated analog Audio/Visual systems to new digital technology that better accommodates multiple devices, makes sharing trial information easier, and gives judges more control over how and when content is shared with trial participants.  And although some cities and counties have been quick to fund this transition, many court systems are left straddled with finding creative ways to fund a project of this scope.  For example, when local lawyers in Louisville, Kentucky wanted new digital Audio/Visual equipment in Jefferson County courtrooms, a non-profit was formed and more than $800,000 was raised to fund the project.  As a result, almost a dozen courtrooms received upgrades. 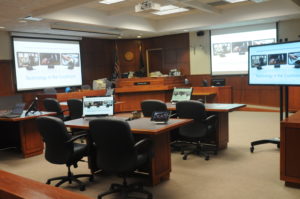 The digital courtroom trend is also filtering into colleges and universities across the country as they embrace the idea of a “21st Century Courtroom.”  Tech-savvy, soon-to-be attorneys process and share information differently than did their predecessors, which has prompted many schools to outfit their mock courtrooms with new digital A/V systems instead of relying on printed materials and flip charts to convey trial information.  Penn State, American University, and others have embraced this concept with the realization that having the most up-to-date environment in which to learn is also a major recruiting tool.

“Colleges and universities are smart when it comes to recruiting and it didn’t take them long to realize technology is extremely important to this generation of students,” said John Jennings, Assistant Vice President of Information Technology at Trinity Video Communications.  “Naturally, this has filtered into the legal space, as the number of ways to record and distribute videos, photos, witness statements, and more has grown exponentially.” said Jennings. 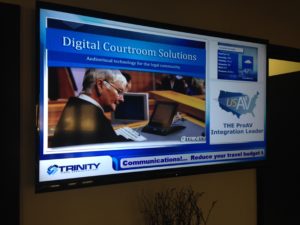 The courtroom technology boundaries are being pushed even further with the idea of “virtual courtrooms”, a relatively new concept but one that continues to gain consideration versus the expense of a traditional brick and mortar environment.

Trinity Video Communications is headquartered in Louisville, KY, with additional sales and engineering support across the U.S.  For more information, contact a Trinity Video representative at 1-800-261-9008 or visit www.trinityvideo.net.