The Jefferson Courtroom Upgrade Project (JCUP) has completed the installation of the all-digital multi-input, triple-screen output audio video system in Divisions 1 and 8 of Jefferson Circuit Court.

The new digital systems feature dual-projection screens with high definition projectors and a 55-inch LCD monitor, which allows trial counsel to display three different images simultaneously. The control system has been simplified. The new AV system is controlled by an iPad that is dedicated to each courtroom. The user interface is a picture of the courtroom showing the various counsel tables and screens. A trial lawyer or support staff routes the input by selecting the picture of their counsel table, the connection into which they have plugged the computer, and the screen to which they want to route the output. This means you don’t have to be a tech genius to control the new AV system. A user is able to master the system with minimal training, which is conducted through the Louisville Bar Association. The court requires the training before using the system. The training is free for JCUP contributors, but will cost $100 per person for those who are not participants in the project. JCUP will also be sponsoring a related training program on conducting paperless trials with an iPad.

The iPad training program will consist of two different classes that will be offered in conjunction with the rollout of the final set of courtrooms. The multiple-input, multi-screen system gives lawyers the capability to use virtually any device that outputs a video or audio signal, and to display different information on each screen. For example, a time line can be displayed on one screen and a document referred to on the time line can be displayed on the other screen. The technology also includes a touch-screen tel-estrator and an independent audio system.

The Divisions 1 and 8 systems have recently been used in criminal trials. JCUP is monitoring the reaction to the system to continue to make improvements during the rollout process. Following hearings and trials, the court will direct counsel to a survey to provide feedback about their experience with the system. The court will also be administering a survey to jurors to obtain their impressions of the AV system. The new AV system will be installed in Division 11 in late September. This will be followed with installations in Divisions 3 and 4 by the end of November, bringing the total to five Divisions by the close of 2013. Divisions 2, 7, 12 and 13 will be installed in February and March of 2014, completing the project with nine installed courtrooms.

The cost to install the digital system in all 13 courtrooms is approximately $950,000. JCUP has received pledges totaling just over $760,000; these funds are enough to install the system in nine courtrooms. An opening reception will be conducted on September 10 in Division 1 to demonstrate the system in a large courtroom and to close the funding gap for installation in all 13 divisions of the Jefferson Circuit Court.| 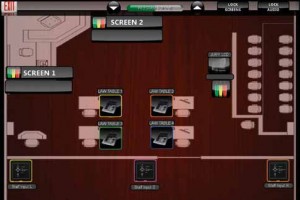 Patrick W. Michael is president and CEO of the Jefferson Courtroom Upgrade Project and a partner practicing in the Louisville office of Dinsmore & Shohl. He is also a member of the LBA Litigation Section.

Trinity Video Communications is proud to be the A/V service provider for the JCUP project. Trinity has developed a number of solutions for courtrooms and the legal community and is ready to create a custom solution for your project. Contact our team today to learn more!